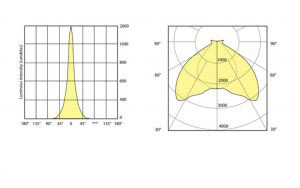 A curve is used to determine the intensity of light emitted by a light at different angles. Since most light sources are not point-based, so they do not have a constant light intensity in different directions.

In optical computing, it is important to know how light is distributed, so manufacturers of different lamps curve that lamp using measurements.

One of the most common methods for displaying a curve is to use a polar curve, since in many lights the light is symmetrical to the perpendicular axis of the light and only one curve on one of the vertical plates is sufficient to determine the light distribution.

The polar curves are in the form of closed lines around the lights, the distance of this line to the lights being different at any given angle and reflecting the intensity of light at that angle.

The polar curves have two major disadvantages, one being that the optical flux of the different lamps is not comparable, the other being that at angles with severe variations in light intensity, the accuracy of the curve is low.

Two or more curves are used to determine the light emission of lights that are not axially symmetric. If the light is too focused, the rectangular curves instead of the polar curve will use the horizontal axis of the angle, and the vertical axis of light intensity.

Each lamp must multiply the values ​​obtained by the curve in the specific coefficient of that lamp — the coefficient is equal to the lamp’s light-to-lumen ratio of 2 lumens.

Lights are divided according to the light distribution curve
Light may reach the surface in either direct or indirect form (reflection from other surfaces),

thus dividing the light into lights. If all the light from the lower hemisphere is emitted and hits the work surface directly, the light is called “direct light”.